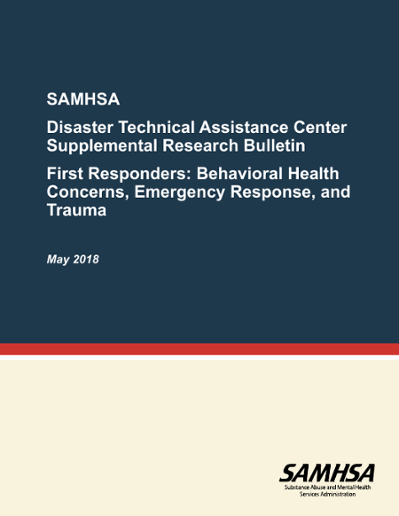 This issue of the Supplemental Research Bulletin focuses on mental health and substance use (behavioral health) concerns in first responders. It is estimated that 30 percent of first responders develop behavioral health conditions including, but not limited to, depression and posttraumatic stress disorder (PTSD), as compared with 20 percent in the general population (Abbot et al., 2015). In a study about suicidality, firefighters were reported to have higher attempt and ideation rates than the general population (Stanley et al., 2016). In law enforcement, the estimates suggest between 125 and 300 police officers commit suicide every year (Badge of Life, 2016). First responders are usually the first on the scene to face challenging, dangerous, and draining situations. They are also the first to reach out to disaster survivors and provide emotional and physical support to them. These duties, although essential to the entire community, are strenuous to first responders and with time put them at an increased risk of trauma. The purposes of this publication are to discuss the challenges encountered by first responders during regular duty as well as following disasters; shed more light on the risks and behavioral health consequences (such as PTSD, stress, and depression) of serving as a first responder; and present steps that can be taken to reduce these risks either on the individual or institutional levels. Those who are among the first to respond to a disaster are referred to by different terms, depending on whether the speaker and audience are part of federal government, state and local government, or other entities, and they may not be clearly defined at all. According to Title 6—Domestic Security of the U.S. Code, first responders include these individuals and groups: The term “emergency response providers” includes Federal, State, and local governmental and nongovernmental emergency public safety, fire, law enforcement, emergency response, emergency medical (including hospital emergency facilities), and related personnel, agencies, and authorities (Domestic Security, 2010). The terms “first responders” and “public health workers” (the term used in some papers) are somewhat arbitrary; the terms include police, firefighters, search and rescue personnel, and emergency and paramedical teams (Benedek, Fullerton, & Ursano, 2007). For the purpose of this publication we will concentrate on three major groups that will be discussed separately—whenever possible—or combined under the term first responders: Emergency medical services (EMS) • Firefighters • Police officers This issue of the Supplemental Research Bulletin is based on literature and scientific publications found through the National Center for Biotechnology Information and U.S. National Library of Medicine (PubMed). All research cited in this issue was published in English, and most was conducted in the United States (with a few exceptions where investigations in other countries proved useful to the topic). We did not include literature on trauma related to military service, as the challenges and types of danger and training are different. We also did not include literature on nontraditional first responders because the literature was not robust.

Government document that addresses the behavioral issues of first responders

Except where otherwise noted, this item's license is described as Attribution-NonCommercial-NoDerivatives 4.0 International