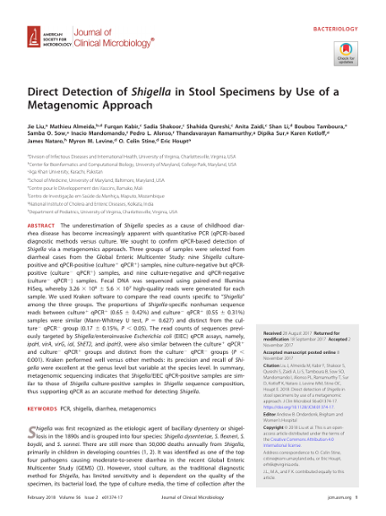 The underestimation of Shigella species as a cause of childhood diarrhea disease has become increasingly apparent with quantitative PCR (qPCR)-based diagnostic methods versus culture. We sought to confirm qPCR-based detection of Shigella via a metagenomics approach. Three groups of samples were selected from diarrheal cases from the Global Enteric Multicenter Study: nine Shigella culturepositive and qPCR-positive (culture qPCR ) samples, nine culture-negative but qPCRpositive (culture qPCR ) samples, and nine culture-negative and qPCR-negative (culture qPCR ) samples. Fecal DNA was sequenced using paired-end Illumina HiSeq, whereby 3.26 108 5.6 107 high-quality reads were generated for each sample. We used Kraken software to compare the read counts specific to “Shigella” among the three groups. The proportions of Shigella-specific nonhuman sequence reads between culture qPCR (0.65 0.42%) and culture qPCR (0.55 0.31%) samples were similar (Mann-Whitney U test, P 0.627) and distinct from the culture qPCR group (0.17 0.15%, P 0.05). The read counts of sequences previously targeted by Shigella/enteroinvasive Escherichia coli (EIEC) qPCR assays, namely, ipaH, virA, virG, ial, ShET2, and ipaH3, were also similar between the culture qPCR and culture qPCR groups and distinct from the culture qPCR groups (P 0.001). Kraken performed well versus other methods: its precision and recall of Shigella were excellent at the genus level but variable at the species level. In summary, metagenomic sequencing indicates that Shigella/EIEC qPCR-positive samples are similar to those of Shigella culture-positive samples in Shigella sequence composition, thus supporting qPCR as an accurate method for detecting Shigella.