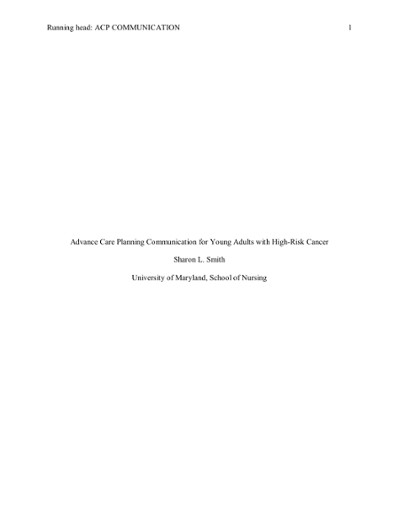 Cancer is the leading disease related cause of death in young adults in the United States, with approximately 10,000 cancer-related deaths each year (Eheman et al., 2012). A young adult with high- risk cancer is faced with contradictory issues, being forced to look at the end of life in the midst of their own developmental challenges (Wiener et al., 2008; Wiener et al., 2012, Zebrack, 2011). The tasks for young adults age 14-21 include moving toward autonomous decision making and establishing one’s identity (Erikson, 1950; Arnett, 2004). For this reason, respecting the opportunity for young adults to make their own decisions is critical to effective communication. In young adults with cancer, social support from family, friends, health care providers, and other cancer patients is identified as a primary coping strategy and is associated with positive outcomes in this population (Kyngas et al., 2001; Trevino, Fasciano, Block, & Prigerson, 2013). Communication about future health care, including the end of life, is the essence of advance care planning (ACP). A diagnosis of high- risk cancer is a threat to one’s autonomy and self- control. ACP preserves patient autonomy and enables a sense of self- determination and self- control even at the end of life (Hebert, Moore & Rooney, 2011). The process of advance care planning is shown to improve quality of life (QOL) at the end of life by increasing communication, social support, autonomy and emotional well- being and decreasing stress, anxiety and depression (Waldrop & Meeker, 2012). However, approaching the topic of ACP is challenging and there is often discomfort on the part of the clinician as well as the patient and family. Issues such as fear of removing hope, lack of training and timing are described as barriers to discussions about end of life (Davies et al., 2008; Durall, Zurakowski & Wolfe, 2012). Conversations about future health are not easy and are often avoided by both healthcare providers and families. They are even less likely to occur if the patient is not an adult. The literature on ACP in young adults has increased in recent years and shows that this communication does not result in distress or negative effects on psychological well-being and is helpful for patients and care-givers (Lotz et al, 2013; Lyon et al., 2009; Lyon, et al., 2013; Lyon et al., 2014). The Institute of Medicine (IOM) recommends that ACP communication occur throughout the lifespan for all individuals; including young adults capable of participating and that it is the clinician’s responsibility to initiative these conversations (IOM, 2014). Similarly, the American Academy of Pediatrics recommends that advance care planning for young adults begins early in the disease process (American Academy of Pediatrics, 2000; Field & Behrman, 2002). The IOM endorses the establishment of evidence based quality standards for communication about ACP. There is emerging evidence describing the benefits of using structured ACP programs for young adults and for the completion of advance directive documents (Lyon et al., 2009, Hammes & Briggs, 2008; Towey, 1997). The development of a consistently applied approach that can be implemented at a time of stability has been recognized as ideal. However, the strategies available to guide communication with young adults about their needs and wishes for their health care, including at the end of life, remain limited (Pritchard, Cuvelier, Harlos, & Barr, 2011). The purpose of this evidence-based project was to use an advance directive document as a guide to initiate communication about ACP for young adults, with high- risk cancer in a simulated clinical setting. It was anticipated that this would facilitate nurse provider communication about end of life issues among the patient, family and the health care team.